Pocket_php is an MVC framework for PHP7+ that emphasizes performance and simplicity.

By abstracting away many of PHP7's shortcomings and implementing an MVC design pattern, the framework provides a safer development and production environment with virtually no performance costs, the entire source code can be read in twenty minutes and was designed with extensibility and mutability in mind to fit any given project that would otherwise require deep modifications of unnecessarily large "solutions" or for the programmer to write generic code that could be prone to security flaws.

It is primarily built for the NGINX server to take full advantage of its scalabilty and performance allowing fully featured web projects to be run on budget hardware. A largely unexploited benefit of modern VPS providers that goes ignored due to the bloated minimal requirements of the modern backend libraries we've (erroneously) learned to depend on.

As long as your webserver of choice respects the simple rules below, pocket_php will work with it.

The provided virtual server file for NGINX also adds a few security filters to keep some static files (such as the internal DB) private. As a side note, there have been some issues with the way php-fpm handles sqlite databases that share the same name but are from independent projects, a very common case when running multiple websites from a single server, simply rename the database file and update the location constant in configure.php.

Pocket_PHP comes with an example site and user guide that serves as its main documentation. 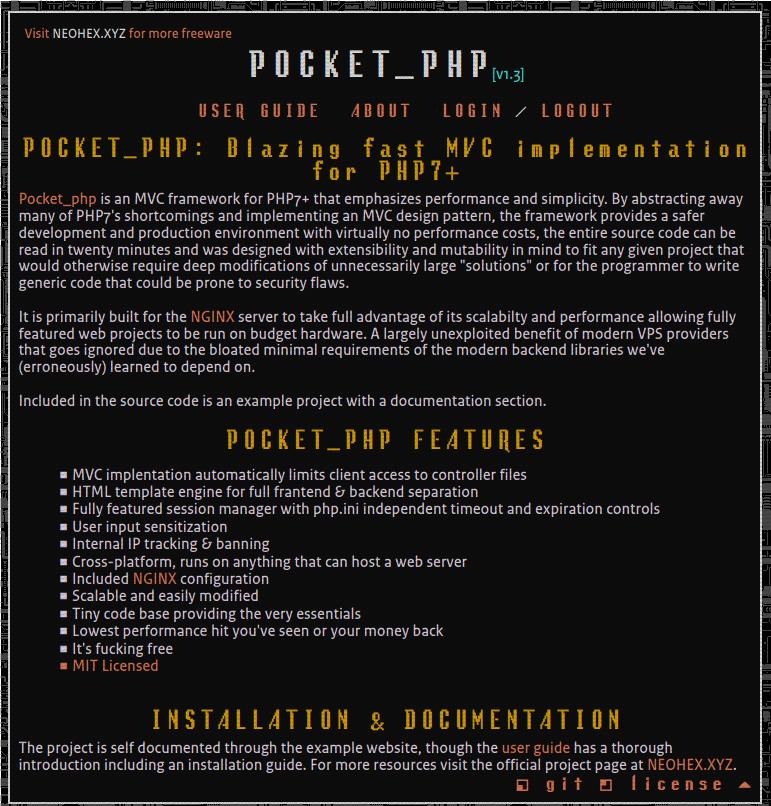 See the "user guide" section for a more thorough explanation.

For more information visit the official project site at XENOBYTE.XYZ